Congratulations to Chief Washington of Decatur, Georgia as she celebrates the 12th Anniversary of her January 6, 2009 appointment as the City of Decatur’s Fire Chief and Emergency Manager. Two years ago The African American Fire Fighters Historical Society recognized Chief Washington at our 9th Annual Salute Dinner. At that time she was the last of the original 6 African American women to be appointed to lead fire departments in America. While celebrating her 10th Anniversary she was the only African American woman leading one of our nation’s fire departments. We can say two years later that there have been many women appointed to chief of departments and promoted to chief officer positions. We are proud of the fact, for that milestone anniversary we had our congressional record request approved by her representative. On January 8, 2019, the legacy of Congressman John Lewis and the legacy of Chief Toni Washington were joined together as he placed remarks in the Congressional Record on her behalf recognizing her achievement. Chief Washington, a very humble person remains a great role model and mentor to many in the fire service. 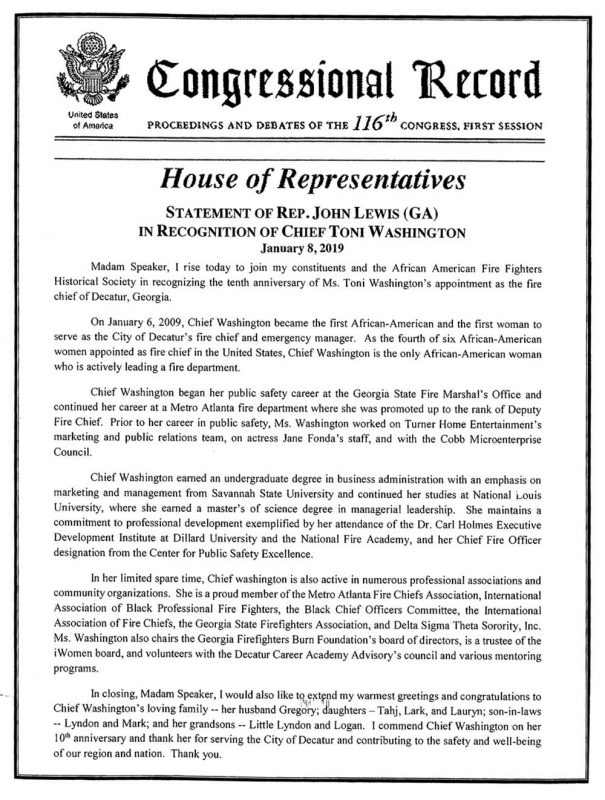 AAFFHS is a 501C (3) Charitable Organization in need of support from people like you.